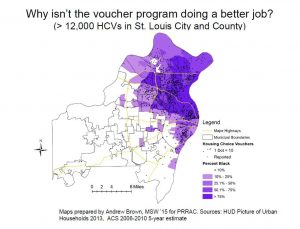 But, according to the Metropolitan St. Louis Equal Housing and Opportunity Council, some landlords are still ignoring the rule and denying homes to people who get the government’s help to pay their bills.

The housing council recently filed a complaint against the M. Jaffe Group, a local real estate company. EHOC said a woman contacted them after her lease was terminated. She uses a Housing Choice Voucher, commonly referred to as a Section 8 voucher, to cover part of her rent.

EHOC lawyer Kalila Jackson said the goal of the lawsuit is to hold the property company accountable.

“And that means everything from helping [the tenant] to recover economic damages (to) asking for an injunction so that they stop this practice so that we not only affect change for the individuals that we’re working with but potentially all the residents,” Jackson said in an interview.

Other tenants also were affected by the company’s lease terminations, Jackson said.

The complaint is now in the hands of St. Louis’ Civil Rights Enforcement Agency.
A slide from a presentation during an April 2015 fair housing conference shows how Section 8 vouchers are concentrated in north St. Louis and north St. Louis County, and that most voucher holders are black.
Credit courtesy Poverty & Race Research Action Council

Jackson said she expects the city to begin interviewing both sides soon. It is unclear when the case will be completed.

The city of St. Louis passed the ordinance, which added “source of income” protection to existing fair housing guidelines, a little more than a year ago.

It is meant to ensure people using vouchers in the city are treated like other renters. Section 8 voucher-holders in St. Louis County do not have the same protection.

EHOC investigator Katina Combs spends her days checking to see whether landlords comply with the law. She said she still sees by many for-rent signs that say, “no section 8,” even now.

Combs says this type of housing discrimination is directly linked to the region’s longstanding segregation issues.

Combs said voucher holders — most of whom are black — are steered toward the north side of the city.

This is counter to the central idea of Section 8 vouchers.

Vouchers are the federal government’s largest form of rental assistance. Renters who have them are supposed to be able to use their vouchers on the private rental market. This, in turn, is supposed to give people choice about where they live.

Combs says that won’t happen as long as landlords refuse to rent to them.