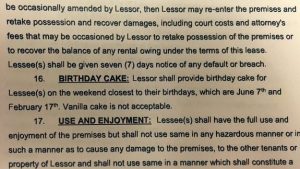 When Redditor GloriousGherkins was delivered his lease to sign by his landlord, it was sent in a Word document instead of a .pdf file, meaning GloriousGherkins could alter the text in any way he wanted.

So the crafty renter decided to sneak in an extra clause, stating that the landlord must provide birthday cakes to the renters.  The clause, which is number 16 on the lease reads, “Lessor shall provide birthday cake for Lessee(s) in the weekend closest to their birthdays, which are June 7 and February 17. Vanilla cake is not acceptable.”

In the comments, some Redditors argued about the sneakiness being illegal, but GloriousGherkins insisted that he is going to hold his landlord to the deal.